Well, I skipped the whole fall when it came to updating the blog, right? Sorry about that. Let’s see if I can condense the events here before I go into our first trip back home since moving to Japan.

Since the last post in which I enjoyed the summer Tokae festival in Nara,

Oookay! So from there, we flew out to America on the 23rd of December. We weren’t initially planning to come back for the holidays due to the financial burden, but we were extravagantly blessed with tickets as early Christmas gifts over the summer by both my grandmother (Nana) and Josh’s parents! Our bags were packed with all sorts of gifts from Japan, as well as some extra thoughtful gifts sent to my family on behalf of my precious coworkers!We took Japan Airlines, and the flight was phenomenal (at least, as phenomenal as a grueling 12 hour flight to Los Angeles can be).

When we boarded the plane the walls were lit up with red and green hues, and Christmas music was playing! The seats were pretty comfy, if not a bit small. Like my initial Delta flight to Japan with the JET Programme, there was a nice personal touchscreen TV with lots of options (more on that later) as well as a cute leetle remote to operate it. Josh and I took a quick selfie to commemorate this joyous occasion!

After a cute safety video, I checked out the available movies- ooh it was like a buffet feast seeing all those titles, many of them new releases, and I had all the time in the world to watch them. There were even video games like Street Fighter 2 (Josh and I spent a good hour trying to beat em up with the little remote I mentioned earlier that doubled as a controller on the back, but it proved nearly impossible. Ryu and his #%&$’n CONSTANT HADOUKEN was so maddening that I had to quit). Between all that and the delicious meals and refreshments (including hot green tea) provided to us, I didn’t sleep at all. I finally got a chance to see the blockbuster Kimi no Nawa (Your Name) on the plane and it was gorgeous and beautiful. I cried a lot. If I had known it was made by the same guy who made 5cm per second though, I would have been on guard. That movie ripped my and Josh’s heart to shreds. After everything we went through with 5cm, it was NOT a good ending! xD However, saying nothing of the ending, I will highly recommend Your Name to everyone I meet. It is super good. After that, I got to watch my first “Bollywood” movie from the “World” section of the menu and I was pleasantly surprised. I chose Kapoor & Sons, a family drama with lots of twists and a love triangle. There were some dance routines, but it was done in a modern, self-aware kind of way (I was actually wanting to see some of the big extravagant numbers like I had seen online, but I guess I will have to check out some other titles!). I cried a bit at this one too.

So then we landed in Los Angeles to enjoy a 13 HOUR LAYOVER xD
Now for reverse culture shock: It was really really strange to be in America again. I giggled a bit at the absolutely massive American flag over the TSA entrance, and then at the small framed picture of Obama which a few people were snapping pictures next to. I thought about how that portrait will be changing in a short while as well…let’s change the subject, shall we? I almost said sumimasen (excuse me) to the one of the TSA workers and felt weird when everyone around me was speaking English. The first thing that shocked me was how…lax, everyone was at LAX. The workers I interacted with were almost jovial which comforted and unnerved me all at once. I guess I had gotten used to the hyper-professionalism of Japanese employees. Randomly, I remember overhearing one burly TSA dude say to another guy “You speak any Japanese? Cuz this one chick was almost in tears when I was talking to her”. I guess even in an International Airport, if you come to America even to visit, you best be speaking English! lol

Unfortunately for me, the first thing I wanted when we landed was a nice big refreshing bottle of green tea, the likes of which can be found all over Japan, and a tuna mayo onigiri. That was quite the wild goose chase, lemme tell ya. Obviously there is no onigiri. There was “green tea” all right, as in green colored syrup water…blech. I just wanted a drink without sugar or sweetener! Is that too much to ask for? Apparently in America it is.Ya want water, kid? We got plenty, along with some sugar flavor drops you can put in it. We went with Panda Express for lunch/dinner/what day is it again? We got the smallest serving size available and it was still too much to eat comfortably. It tasted different than I remembered…good, but like I could taste the fat grease in it? I don’t know how to describe it. We ordered a medium rootbeer to split (rootbeer being a scarcity in Japan) and received the most ginormous drink I had ever seen called a “medium”. Oy. That meal kicked us in the butt. In the latter part of the layover, I ordered some California fish tacos, but they gave me chicken instead. For whatever reason I didn’t say anything- I was just exhausted and wanted a shower. It didn’t taste so good. Tulum, my favorite CaliMex place in my hometown, was a million times better. After eternity upon eternity, we boarded the flight to Nashville where we were picked up by our awesome friend Shawn! We immediately went to Waffle House. Again, it tasted good but different yet heavenly at the same time. I completely stuffed myself into oblivion. Why? I don’t really know. We went on to gain 10 pounds each during our short stay in America (Lord have mercy).

That evening Josh’s parents picked us up from Shawn’s house, where I was trying but failing to stay awake while watching the heartfelt Zootopia for the first time. I kept dreaming that I was dreaming, like being in America was the dream and I was actually still in Japan. It was rEAaLLy difficult for Shawn and Josh to wake me up. I was like three gates past the living there, for a minute. Yikes.

We were like rocks in the back of the van ride home. Somewhere near Loretta Lynn’s place on the way to Jackson, Josh’s parents stopped for a meal at Arby’s at a gas station. Josh and I were jolted awake to our first big “welcome” to Tennessee. Haha. Here’s the account from my Facebook once I got WiFi. After leaving peaceful Japan it was a harrowing experience, to say the least:

“Ultimate culture shock: Tennessee Edition. Josh and I are both sound asleep on the way to Jackson as his parents make a stop at a gas station restaurant. Suddenly we both wake up to the sound of screaming right next to us and someone is pounding on the van- “YOU STOLE ALL MY #%@ MONEY. I’LL KILL YOU!! I’LL @#%¥ MURDER YOU!” I am jet lagged so bad I don’t know where the heck I am or what money I owe. We both jump up and it’s a middle age blonde lady going postal on the car next to us. Another dude is parked to the other side of us wide eyed and we are both like ”Wtf is going on”. Lady is screaming at the top of her lungs on the phone shaking this car. Josh steps out to see if she is damaging the van, she sees him and suddenly says: “Sorry, I’m just going to have murder him. Merry Christmas.” and drove off. Wtf?! Welcome to America!!

So after all that, HAHA, we had a good night’s sleep in which I entered the world of Inception again, and then began Christmas festivities. It was so wonderful to see everyone again. Literally up until New Year’s day I automatically woke up every day at like 7:45 AM bright eyed and bushy tailed like some kind of unnatural squirrel freak. Like I honestly wish I could normally feel so well rested and ready to start the day each morning. Anyway, it was good that jetlag gave me that strange benefit because our days were PACKED with holiday cheer up until we left. Here are some more photos:

I forgot to take photos at the other family gatherings!! Dx

Shortly after Christmas Josh and I got the board game Catan (thanks so much Nana and Hamby)!! We had never played it before but proceeded to play it every waking moment with everyone we knew afterwards. The winners’ circle now consists of Josh’s dad, Josh, Shawn, and finally me, literally like the day before we left. For great victory! You KNOW we brought it back to Japan to enjoy with our friends. Woot woot!

Everyone really seemed to love their presents from Japan, which really warmed my heart. I loved seeing my kid cousins too, who seemed to have grown exponentially since I left. I met up with tons of dear friends like Tiffany (we got our nails done and I somehow forgot how the process worked for a moment) and McCall (we ate at my favorite place, Tulum! Yeeeeeeeey!!!). Josh and I were especially happy to see our BFFs for life Spencer and Ethan (why oh why do we not have a group photo!) So much seemed to have changed since we were gone. My uncle and new aunt got married! YAAY! Dubstep is now featured in commercials for boring things like soymilk! TV now seems to be 95% commercial breaks! One of my friends even had a baby while I was gone! I loved seeing Kim and her sweet daughter Madie, who is now one year old! 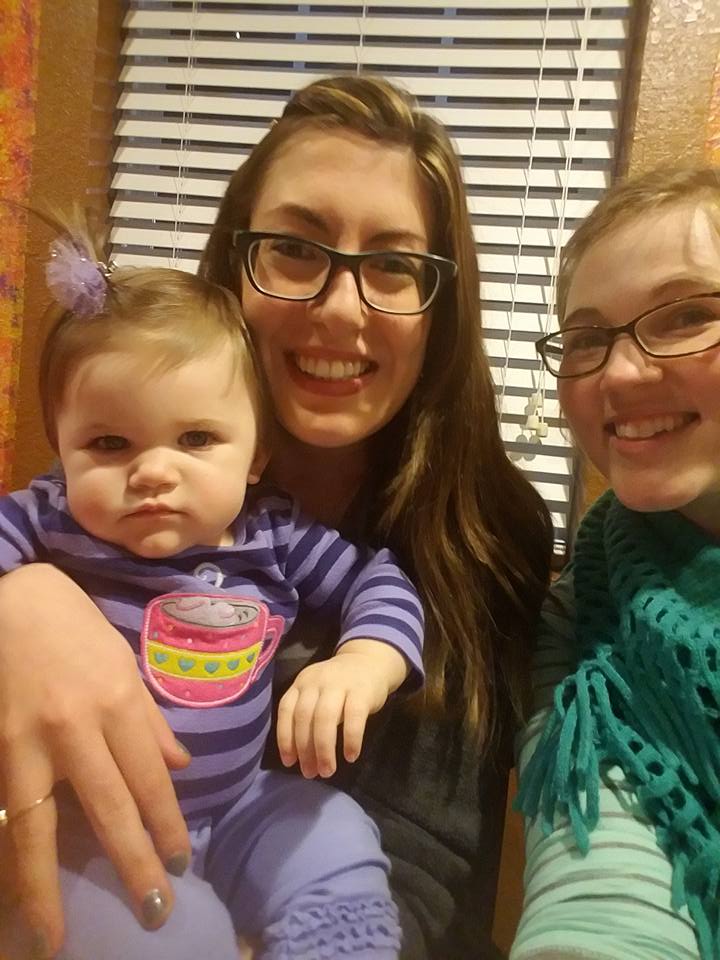 Overall, our time in America was incredibly bittersweet. So much joy with the knowledge that we would be leaving it again for a long time. Oddly enough, I found myself feeling homesick for Japan at the same time. I wish we could visit our friends and family just any old time, as if driving down the road. Our first trip back in nearly two years kinda reinforced the reality that something like that isn’t possible. The world’s a big place, eh? And now I’ve picked up a ton of Japanese non-verbals that I didn’t even realize I was doing until friends pointed it out to me. It was really difficult to say goodbye to everybody, especially with the anticipated changes of the New Year. I wonder what the future holds for all of us! Let’s find out~

Happy New Year, everyone! <3 I’ll be thinking of you.

2 thoughts on “Christmas in America & More”