Josh and I had a wonderful Valentine’s Day weekend. We caught up on some of our favorite series, walked to the shopping mall, and ate a wonderful meal there together. I ordered ketchup omurice from Pomme’s and Josh had steak at Pepper Lunch. I had dessert at my favorite crepe and gelato shop too- CocoPlus! I ordered the Caramel Crunch Macchiato crepe: it was simply divine. Coffee ice cream, custard and caramel whipped cream, with Oreo cookie pieces wrapped in a delicate vanilla crepe. Ah, it was heavenly! The walk back was also quite nice- the weather wasn’t too cold for a winter day.

That evening I crafted some homemade chocolates to bring my co-workers the next day! I filled heart shaped cookie cups with a fudge mousse and topped it with edible silver beads and white chocolate icing. In Japan, it’s customary for girls to give chocolate to the men in their life (including co-workers and bosses), but I made enough for the entire English department as well as my bosses. I also wrote a little thank you note to go with each one. Everyone’s reaction on Monday made me so happy! Each person stopped by my desk to say thanks and to tell me how delicious it was.I also got many unexpected gifts from my students! 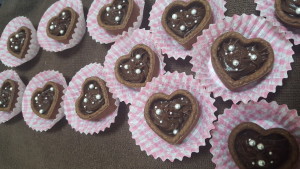 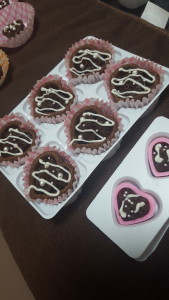 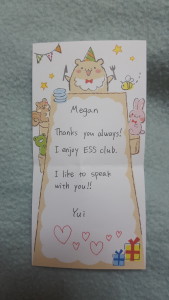 For the past two weeks I have been teaching a Valentine’s themed lesson plan to my first and second year high schoolers. From the start I wanted this lesson to be as jam-packed with English conversation opportunities as possible, but also a lot of fun since this would be their last lesson with me before final exams. I synthesized several different ideas from other ALTs in the Japan Teaching Resource network, and created some of my own ideas as well!

I started the class with the “Minute Marathon” warm-up that I learned in the Skill Development Conference. We tried this for the first time last month for the lesson on New Year’s Eve, so by this point the students knew what to do. Students make pairs and I set the timer for one minute. One student will talk for the full minute while the other listens (after one minute they switch). There are only two rules for this activity: English only, and no stopping! Much to the humor of my students, this means that you can say absolutely anything you want as long as it’s in English, and as long as you don’t pause for too long. It also helps build the confidence of shy kids, or those who may not know much English. I found that kids can only say “This is a pen” so many times in a row before they get tired of it and start to say something else. Every little improvement counts! During the minute I patrol the groups to make sure no one is breaking the rules by using Japanese or staying silent. If the rules are broken, we start the minute all over again. This activity was quite the challenge for some students, but they were so proud of themselves once they achieved the goal!

Next, I gave a very short presentation (in order to make room for the other activities) on what Valentine’s Day is like in America. The students seemed rather shocked by the extravagance of gifts and the fact that boys are generally expected to be romantic on this holiday. 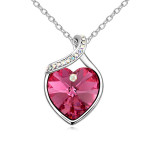 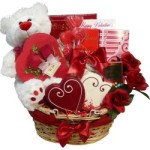 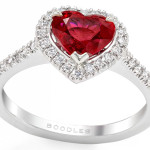 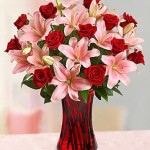 After that we started in on the real fun- I told my students that since couples usually plan a special date together for Valentine’s Day, today they would be going on a special date with one of their classmates. After the initial confusion wore off, I explained that they would be drawing a random “character card” out of my bag, and their goal would be to find their match via “speed dating”! I owe many time-saving thanks to Ms. Jitterbug of the Japan Teaching Resource group for her clever character cards. Each card featured a picture along with a name, age, and career. The characters ranged from the Simpsons, to Santa Claus, to Barack Obama! The students were laughing as soon as they drew their cards. I then explained how the game would work- using the same partner from “Minute Marathon”, each couple would have precisely one minute to get to know each other and hopefully agree to go on a date together. After one minute, each person would move one seat and the next date would start. I wrote conversation ideas on the board and explained phrases like “let’s go out/hang out” or “let’s just be friends”. The real fun was when the students ran into terrible matches and had to find a way to decline the date (a grandma with a football player, perhaps, or Obama with Santa Claus). I got a kick out of hearing some of the creative responses. One student was paired with Princess Jasmine and asked her if she was still dating Aladdin. One of the students who drew the Obama card shouted “Yes we can!” whenever I walked by. I shook his hand and asked if I could have his autograph, haha. We rotated about 10 times, and the kids were excitedly conversing in English the whole time- it was quite a site to behold, especially since some classes are notoriously quiet during activities.

After this activity, we broke into 8-9 teams and I explained that we would write a romantic love poem together for Valentine’s Day. I gave each team a single Story Cube (I bought this game way back during the time I worked at Hobby Lobby because I came across it stocking the shelves and it looked interesting. Little did I know how useful it would be for teaching English as a second language! I can’t recommend it enough- it has a way of unlocking the imagination in surprising ways). They got a bit nervous until I explained that each team only be writing one sentence of the poem. However, the catch was that they had to make their sentence about whatever image they rolled on their Story Cube. I created a few poetic examples by arranging some “poetry fridge magnets” (made out of index cards and magnet tape) on the board. I was so impressed by the creative ideas students came up with! Sometimes the students rolled easy stuff like an eye, or a flower (You are more beautiful than a flower). But sometimes they rolled a cockroach or an alien. My classes have included both ”You are the only girl in the world for me” and ”You have the life power of a cockroach”. My last class ended with these two lines: ”I can’t live without you” ; ”Aliens were born to change the world!” Once the poem has been completed, I read the whole thing as dramatically as possible (with plenty of laughs) and then congratulate the class on a romantic job well done. If everything went according to schedule, the bell usually rings right at that moment! 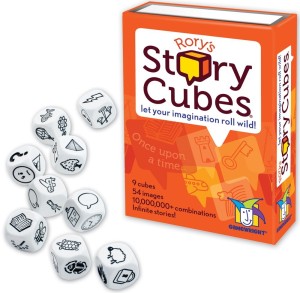 With the school year drawing to a close, I must say that my time here so far has been a challenge and a blessing. I can’t wait to see what the future holds for me here in Japan!