So, I spent a bit more than I was expecting for dinner last night so I resolved to save some money by taking a bento to work the next morning. Maybe you’ve seen the kind of intricately prepared lunches that my co-workers regularly bring to work. I guarantee you, this will not be that kind of bento.

See, Josh is the master chef in our relationship. I can always count on him to prepare a delicious dinner from whatever we might have lying around the house. If the feeling struck, I could pack some of those leftovers for the next day, but I normally like to buy the delicious 500 yen bentos that are delivered to us teachers from a local company. Me, I just like to bake sweet things occasionally. So when I returned home late with my bento-determintation and Josh had already gotten something for himself with no leftovers in sight, I knew it was up to me to make lunch for tomorrow.

Here’s the recipe if you want to try it at home.

Step one: Prepare some rice like you normally would, but with great haste cuz you wanna catch up on your shows in time to get some sleep.

Step two: Find a carrot lying around. Also a rather large sweet potato. These items have been all but forgotten since last time veggie and chicken curry was made. They will most likely go bad soon. You are compelled, nay, obligated to use them in the bento. Cut them up- quick! Dump them in the rice cooker to kill some extra birds with your stone.

Step three: Realize that there is no more rice wine vinegar to make the rice extra tasty when it’s done cooking. The market is also closed *internal screaming*

Step four: Something is missing. We need something else. But there’s nothing to add. Sour patch kids are out of the question, even in a little side compartment. You tried that once before and the aesthetics were all wrong. No, surely there must be something else.

Step five: Find a can of sliced pineapple in the cabinet. Dump it in the rice cooker too.

Step six: Pour cinnamon all over the top. This is actually smelling really good.

Step seven: Cook it and enjoy the feelings of Christmas past. Catch up on your shows. When it’s done, separate the rice from the other stuff.

Step eight: Fill the bottom compartment with rice. Sprinkle some tasty sprinklins of some sort of top. In the upper compartment of your bento, take out all the little dividers and just mercilessly smash everything into it until all of it fits. A few pineapple slices will refuse to be crushed into the mush, so just eat them as your meal prep reward. 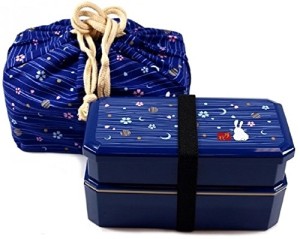 (This is my pretty Year of the Rabbit bento that I bought online way back when living in Japan was only a distant dream! The danger with these kind of decorative boxes is that your co-workers expect the inside to be just as pretty…only for a lump of Gaijin Smash surprise to be lurking in its chambers)